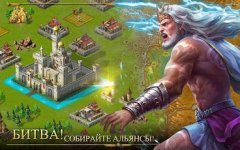 Age of Warring Empire - strategic role-playing game where the user will have to control the kingdom, intending to make it one of the most developed and powerful. Initially, in a mobile project, it will be necessary to build several buildings, as well as try to collect certain resources. Properly managing existing opportunities, the gamer will be able to build the greatest empire. Thanks to the victorious and cheerful troops, the head of the kingdom will capture enemy lands, thereby expanding its territory. So that your undaunted army does not lose its legal capacity, you must not forget about the regular training of your fighters and observe their state of health.
Download Age of Warring Empire 2.6.02 on Android
Download: Original version

Great Conqueror：Rome
global strategic toy, where the user will play the role of the ruler of the Roman Empire.
upd

Necromancer Returns Full
strategic role-playing toy, where the user has to stand at the head of a large army of a brave
upd

Throne Rush
a high-quality representative of the strategy genre, which has elements of a massively multiplayer
new

Brave Conquest
beautiful fantasy strategy game with multiplayer mode, made in the best traditions of the genre.
upd

Forge of Empires
a strategic game where users will need to turn a small settlement into a huge kingdom and rule it.
upd

Eight-Minute Empire
An interesting board toy with a special concept. Users need to build their empire, they are given
upd
Comments (0)
Comment
Best games